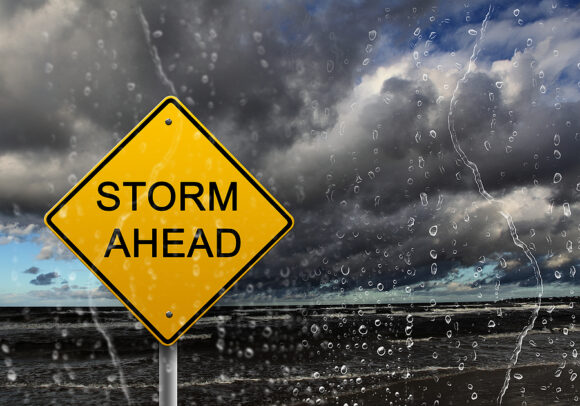 Thousands of residents were under evacuation and shelter-in-place orders early Tuesday after heavy rains unleashed mudslides in a mountain area east of Los Angeles that burned two years ago, sending boulders and other debris across roads.

Firefighters went street by street in the community of Forest Falls Monday night to make sure no residents were trapped. Eric Sherwin, spokesperson for the San Bernardino County Fire Department, said crews hadn’t found anyone who needed to be rescued and no one was reported missing. Crews would canvas the neighborhoods again and begin cleanup efforts after sunrise, he said.

“We’re not gonna know the extent of things until we get to first light,” Sherwin said before dawn Tuesday.

Many structures in the area had varying levels of damage, Sherwin said, including a commercial building where the mud was so high it collapsed the roof.

The rains were the remnants of a tropical storm that brought high winds and some badly needed rainfall to drought-stricken Southern California last week, helping firefighters largely corral a wildfire that had been burning out of control about 20 miles south of the mudslides.

The mud flows and flash flooding occurred in parts of the San Bernardino Mountains where there are burn scars — areas where there’s little vegetation to hold the soil — from the 2020 wildfires.

“All of that dirt turns to mud and starts slipping down the mountain,” Sherwin said.

One of the wildfires, the El Dorado Fire, was sparked by a smoke device used by a couple to reveal their baby’s gender. A firefighter died and the couple was charged with involuntary manslaughter.

For some homes in Forest Falls, it was too late to evacuate and residents were told to shelter in place through the night because it was safer than venturing out.

“The roads are compromised or they’re covered in debris,” Sherwin said, adding that crews planned to work all night using heavy equipment to clear routes.

The mudslides came after a week that saw California endure a record-long heatwave. Temperatures in many parts of the state rocketed past 100 degrees Fahrenheit (38 degrees Celsius), and pushed the state’s electrical grid to the breaking point as air conditioners sucked up power. The Fairview Fire in Southern California and the Mosquito Fire burning east of Sacramento broke out and raged out of control.

The tropical storm aided crews battling the Fairview Fire about 75 miles southeast of Los Angeles. The 44-square-mile blaze was 56% contained by late Monday. Two people died fleeing the fire, which destroyed at least 30 homes and other structures in Riverside County.

The Mosquito Fire has grown to 76 square miles, with 16% containment, according to the California Department of Forestry and Fire Protection. While crews were able to take advantage of cooler temperatures and higher humidity Monday to strengthen control lines, more than 5,800 structures in Placer and El Dorado counties remained under threat, and some 11,000 residents were under evacuation orders.

Smoky skies from wildfires in many areas of the West caused air quality to deteriorate Monday, with dangerous levels of particulate pollution detected by government and private monitors in portions of eastern Oregon and Washington, Northern California, central Idaho and western Montana. In some areas, people were told to avoid all outdoor activity until the pollution cleared.

In Washington, fire officials scrambled to secure resources for a blaze sparked Saturday in the remote Stevens Pass area that sent hikers fleeing and forced evacuations of mountain communities. As of Monday, the Bolt Creek Fire was 2% contained and had scorched nearly 12 square milesof forestland about 65 miles northeast of Seattle. A larger incident management team and additional fire crews were slated to arrive Tuesday, officials said.

In Oregon, utility companies said Monday they restored power to tens of thousands of customers after shutting down service over the weekend to try to prevent wildfires during high winds, low humidity and hot temperatures.

Both Portland General Electric and Pacific Power enacted planned power shutoffs Friday amid the extreme fire danger. The utilities were concerned that the winds would cause live power lines to break or sag, making sparks that could ignite tinder-dry vegetation.

South of Portland, evacuation levels were reduced near the 135-square-mile Cedar Creek Fire, which has burned for over a month across Lane and Deschutes counties. Firefighters were protecting remote homes in Oakridge, Westfir and surrounding mountain communities. Sheriff’s officials warned people to remain ready to leave at a moment’s notice should conditions change.

Scientists say climate change has made the West warmer and drier over the last three decades and will continue to make weather more extreme and wildfires more frequent and destructive. In the last five years, California has experienced the largest and most destructive fires in its history.

2022-09-13
Previous Post: How to Hire a Home Improvement Contractor
Next Post: Home Insurance Prices: Where Are They Now?

Difficult conversations at work are inevitable. Here are our 9 tips for

How to Ask for a Raise

Are you hoping for a raise this year? You’re not alone. Many