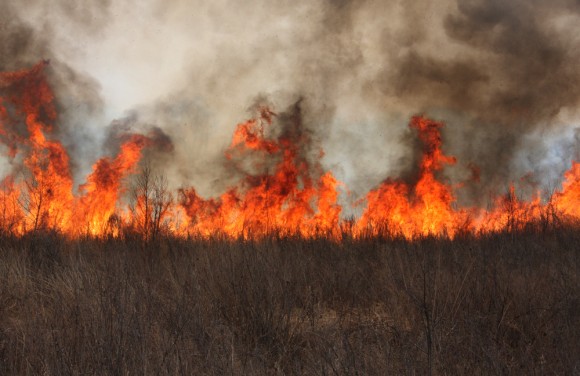 More than four grueling months and $300 million later, the federal government has declared the largest wildfire in New Mexico’s recorded history 100% contained, a notable milestone but just another step in what local residents and officials say will be a long journey toward recovery.

The blaze was sparked in the spring by two errant prescribed fires conducted by the U.S. Forest Service. More than 530 square miles of the Rocky Mountain foothills burned, hundreds of homes were destroyed, livelihoods were lost and drinking water supplies were contaminated.

Local officials say there are years of work ahead of them to restore the landscape and protect against post-fire flooding.

San Miguel County Manager Joy Ansley and her team have been working nonstop since the first plumes of smoke began rising from the Sangre de Cristo Mountains. They helped coordinate the evacuation of thousands of people from small mountain villages and worked with the state and the city of Las Vegas as flames approached.

With the summer rainy season in full swing, Ansley said parts of northern New Mexico are flooding on a weekly basis.

“It’s going to be a long process and just because the fire is contained, we’re certainly not out of the woods,” she said Tuesday.

In addition to costs related to fighting the fire, federal emergency managers have paid out more than $4.5 million in aid to affected individuals and households and $6.7 million in low-interest loans for smalls businesses.

While more than 1,200 applications for individual assistance have been vetted, the Federal Emergency Management Agency would not say how many total applications have been received or denied.

Some residents have voiced frustrations about denials over a lack of having a street address for their rural properties. Others have complained that federal officials don’t understand rural life in northern New Mexico and how fallout from the fire has affected them.

New Mexico’s major disaster declaration has been expanded to include flooding, mudflows and debris flows directly related to the wildfires. Dasha Castillo, a spokesperson for FEMA, said residents who already applied for wildfire disaster assistance just need to update their original application to include flooding or other damage.

Castillo encouraged people to contact FEMA if they applied and haven’t heard back.

Legislation is pending in Congress that would authorize full compensation for New Mexico residents and business owners for losses caused by the massive wildfire, but there’s uncertainty about the ultimate price tag.

The scar left behind by the wildfire includes some areas that were reduced to ash and others where the severity was less intense. More than 400 firefighters are still assigned to the blaze and have been busy repairing hundreds of miles of fire lines cut to corral the flames, digging trenches to control erosion and removing fallen trees and other debris.

The U.S. Forest Service said helicopters will distribute about 138 tons (125 metric tonnes) of seed and 5,440 tons of mulch. So far, about 4 square miles (10 square kilometers) have been seeded.

No hot spots have been reported for more than a month, but given the history of how the blaze started officials wanted to be confident when declaring containment, said Stefan La-Sky, a fire information officer with the U.S. Forest Service.

“We don’t take that number lightly,” he said of the designation.